What the hell am I, NZFiend, going to rave on about this fine morning?

Renowned Doctor Gabor Maté on Psychedelics and Unlocking the Unconscious, From Cancer to Addiction

Drug addiction expert speaks on the mind-body connection and the medical and emotional potentials of psychedelics.
As someone who suffered severe migraines and should have been epileptic to some degree (both my other “real” sibling were / are – one drowned in bath because of gran mal episode…) I was intrigued that after first trying LSD-25 in young teen years that I had no more migraines or issues with light > eyes > dizzy spells. This has come back a little in recent years, but that is over twenty years later.
The good doctor, Gabor Maté, whom  I have been harping on about since the beginning of time, has been mucking around with psychedelics in various treatment processes for a while. Similar to the rather crudely performed tests in the late sixties (patients were supervised for far too short timeframe and then left to their own devices on quite high doses of LSD – What do you think is going to happen?!!!) there were other, more beneficial tests that quietly got swept under the carpet.

Talk about flashbacks. New research suggests thatLSD — a mind-altering drug known to cause recurrent hallucinations — may find new popularity not as a recreational drug but as a treatment for alcoholism.

In a study published in the Journal of Psychopharmacology, researchers affiliated with the Norwegian University of Science and Technology and Harvard University looked at the results of six studies of LSD, conducted between 1966 and 1970, that were largely overlooked when they were first published. The researchers found “evidence for a clear and consistent beneficial effect of LSD for treating alcohol dependency,” according to a written statement released by the journal’s publisher.

And sobering up wasn’t the only apparent benefit of LSD the vintage research showed, according to the statement. As the author of one of the studies wrote at the time, “It was not unusual for patients following their LSD experience to become much more self-accepting, to show greater openness and accessibility, and to adopt a more positive, optimistic view of their capacities to face future problems.”

Maybe that’s not surprising, given how LSD works. By affecting so-called “serotonin receptors” in the brain, the drug is known to alter imagination and perception. And if you want to know what that feels like, take a look at the black-and-white footage above — purportedly shot in Los Angeles in 1956 — in which a woman recounts her own acid trip.

“I’ve never seen such infinite beauty in my life,” she says in the video. “It’s like a curtain or a spider web. Can you see it? Everything is so beautiful and lovely and alive.” – From Huggington Post (with links to BBC news, UK – www.huffingtonpost.com/2012/03/09 – Click on it)

Now, I am presuming that everyone has had a good acid trip or two in your time. At least some real strong mushrooms then. Not the fly agaric ones… Too strong they are. Only take if you want to play at being god for a while….

Uhm.
Rightiho… I don’t need to explain the effects or the possibility of this sort of thing being good for your adult thought processes and teaching you things about yourself and your relationship to the planet and other life forms travelling with. I did mention once that a good trip saw me seeing the emotions of tree’s and even had me feeling sorry for the gravel on the road under joggers feet. I don’t know what the early morning joggers thought of me and two girls laying on the road looking at gravel they had just left foot prints in, but who cares. Stuff them and their Nike’s.

So, there are plenty of good results from using drugs of this nature to open pathways through your noggin that otherwise would struggle to send little shots of electricity from one bit to the other bit. The old wheels upstairs are turning. And some of them need a bit of oil. Feeling empathy with gravel is a little off the beaten track. Suggest keeping your head at least four inches from the ground. Otherwise grass could become scary and gravel could become piles of dead bodies from some large scale war. My war had horses and the odd gun. Red coats. It was real. And the joggers Nike killed Colonel Custard for me.

Rule one when tripping – Always have a baby sitter, someone who trips, who has taken a small dose (just to be social) or no dose at all. Rule two when tripping – Do not allow your head to rest on the ground. Keep focused on bigger pictures. 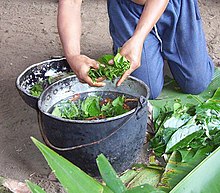 Gabor Maté has been doing work with AYAHUASCA, a plant product seen in photo.

Okay, Yahoo it (or better yet use www.ixquick.com search engine, SERIOUSLY PEOPLE! You have been warned…)

I guess Gabor is using this plant rather than LSD as it is easier to get around the law makers in Canada nowadays... Or something similar.

Gabor worked in palliative care for seven years before working with addictions for over a decade. He is one of the foremost thinkers on the causes of ADhD, addiction and the place in the world of such people.

His works include a few great titles that everyone at Wellington Addict Disservices should be forced to read.  Bloody seriously, I kid you not. I probably know more about addictions than the bloody addictions people do, and I have not even read his main title on the subject yet.

I am going to buy copies and send them to Sam McBride etc. You watch.

But now Gabor has moved off into new tangents of his work. I have also been reading books like Rethinking Madness and Physics In Mind. Even the NeuroScience and Religeon book agrees with just about everything. All three books end up almost agreeing with eachother on just about everything. Physics in Mind is the bible of how the brain works at this point for me. There are articles on Neuronal Synchronization during Competition for Access to Consciousness as example. This is interesting, in context.

All you have to understand really is that the brain works, and all these clever people are working out how. Most of Gabors research up until now has been largely proven beyond doubt – that is, that anyone with all the facts cannot argue his outcomes.

UNTIL NOW you say NZFiend?

Now Gabor is saying (please just read the whole article if you want to know exactly how and why he is saying it – I agree with everything he has researched and looked into whole heartedly, he is a far more knowledgeable and intelligent man than I)

“… look at Cancer and Addiction as two adaptations to stress…..”

Hang about Doc, are you saying that cancer is caused by external stresses and part of our coping mechanism with the stresses actually causes cancer?

Pretty much, I think that is what he is saying. He goes on to explain how he reaches these conclusions. Again, you cannot argue with his thought process or methodology.

I cannot argue with the idea that suppressing feelings of anxiety, annoyance (let us say your husband is a complete dork and you just put up with it for fifty years, get cancer and die worrying about how he will look after himself when you die…) or other strong stresses would decrease the bodies natural ability to fight and be healthy. There are many examples of exactly this happening, too many to be co-incidence, definitely.

But, I am going to argue my sisters case here.

She may have been hiding some resentment at something all these years. She was single, didn’t have a child. That could be a major regret. A major stress? She died age 37 of lung cancer. She never smoked a cigarette, other than in those pubs and clubs via second hand smoke. But what she did do was be too healthy. She ate normally, did everything normally really – other than ride her bike or run everywhere she could. I have a sneaky suspicion this is what killed her.

She was living and working in London. Riding a bike, huffing and puffing, opens up all those little bits of the lung… Every breath you take goes right in there. Right to the very end of the system. Right down into the little little bits. Where, no matter how much you cough, the car exhaust never comes out.

Gabor does a very good job of showing examples of how his theory fits in with selected people (whom are all now dead)… But it does not alone provide the answer for whom is going to get cancer. Cancer is caused by environmental factors, combined with Gabors theory of stresses.

Stresses will limit or allow the production of immune system responses.

Even at the lowest level… Uhm, say, uhm…  You are depressed, so you don’t eat enough veges. The veges help the body process certain toxins and spit them out.

Some would say you have not eaten your veges so you got cancer in your intenstine.

Gabor would say you were too stressed to eat your veges.

I say STOP SMOKING CIGARETTES AND SUCKING ON CAR EXHAUST FUMES.
Go home, take some LSD, and eat your veges.

But then why is addiction being treated like it is a disease? The guys at the top diagnose you as having an illness, the prescribed cure is maintenance or detox. But neither of those actually work at the core of the problem. And yet it is the model which is used to this day. Even though every pharmacist, every mum and dad, every son and daughter knows that no one ever comes off the methadone. No one. Ever. Not even me. It won’t happen.

At least, not until you look at the underlying issues. BEING A SCREWBALL.

Say something, we want to know... Cancel reply